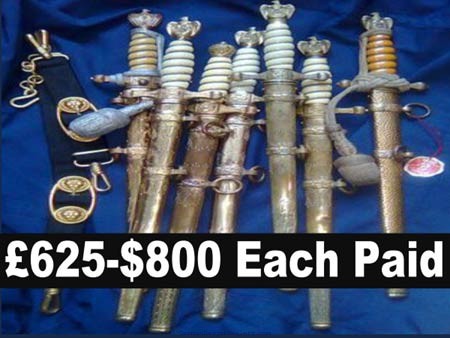 An article dealing with the collecting of daggers. Covering Imperial Germany, The Weimar republic and the Third Reich period.

Focus on the different types of Nazi daggers worn during World War II.

Following the financial slump of 1929, German’s economy was depressed . 30% of the population were unemployed and it’s production capabilities were strained.

A determined Adolf Hitler and his party prevailed politically in a period of social unrest, crushing opponents to establish his dictatorship. The government under Adolf Hitler believed in the invincibility of the German race. It also believed in territorial expansion, land for it’s superior people . A desire that would precipitate the Second World War.

The adoption of Historic symbols to distance the Third reich from the old Germany .

Radical transformation led to some traditional national symbols to be eliminated overnight, only to be replaced by new military, political and social symbols ; The wearing of daggers as badges of rank in a variety of forms to denote at a glance which organisation the wearer represented .

The mechanism of the Third Reich would flourish on the fear instilled in Germany’s people. A nation who had to accept the unacceptable would do so in a climate of personal fear . The dagger a weapon worn as a symbol of power and control.

The German flag (black, red, and gold) was replaced with the Swastika flag (Red rectangle ground , a white circle at the center, and a Swastika an ancient symbol within . The national anthem was re worked with the addition of Hitler salute, achieved by raising the right arm forward . Nazi daggers were issued to military, paramilitary, political, and civilian groups of the Nazi government starting in the year 1933. Production was stopped in 1942. These German daggers, Third Reich daggers,World War II daggers, or ceremonial dress daggers were predominantly worn by German officers and high ranking officials in public and official gatherings.

Millions of Third Reich daggers have survived , with hundreds of cutlers manufacturing them at the peak.

The component parts of German daggers differ considerably according to their military and paramilitary designations. From the pommel, length to markings on the blade, these differences emphasize the dagger’s purpose and bring prestige to the rankings of soldiers. To start with, the following are the Third Reich daggers of German Armed Forces or “Wehrmacht”

The Heer or Army Dagger

The Army or Heer had 15 million soldiers at the start of the war. The daggers issued to them were position-appropriate—each officer is awarded a dagger according to his rank in the army. Paul Casburg was commissioned to design the German Army Officer daggers in 1935.

The basic parts of an Army Nazi dagger are:

1. Dagger pommel is a silver plated cast metal knob, with leaves etched at the side.

2.The Army Dagger’s guard obverse takes the form an eagle with spread wingspan, clutching a wreath containing the swastika sign. below the wings of the eagle are returning spirals .

5. The Dagger blade features a logo of the manufacturer on the ricasso in most cases . The tip is tapered, with a thick band of fuller at the centerline.

The Navy or Kriegsmarine had 78,000 personnel. The famous among big manufacturers of daggers given to the Naval personnel was Elckhorn Solingen.

The component parts of a Navy Nazi dagger are:

1. The Dagger pommel is a gilded bronze eagle with wings folded, grasping a swastika in its talons .

2. The Dagger cross guard has an anchor motive on its obverse center.

3. The Dagger hilt has twisted brass wire wound around the ivory effect grip.

4. The Dagger scabbard has lighting bolt design to the base or alternatively a hammered effect .

5. The Dagger blade contains markings of a superimposed eagle and swastika over an anchor. The company logo is also etched on the ricasso.

The Air Force or Luftwaffe was considered the most powerful in its time.

With thousands of pilots, many of whom were ace pilots, they dominated the European skies at the beginning of the war.

The Air Force Nazi daggers were first introduced in 1934.

The basic parts of an Air Force Nazi dagger are:

1. Dagger pommel is a solid metallic globe containing a swastika sign at its front.

2. Dagger cross guard is made up of the wings of an eagle, clutching a swastika sign without a wreath.

3. Dagger hilt has twisted brass wire wound around the grip, whose color ranges from pale yellow to deep orange.

4. Dagger scabbard is a simple metallic sheath, with a round tip. Near the tip is an etching containing three oak leaves.

5. Dagger blade contains the logo of the company at the ricasso at the backside of the dagger. The tip is tapered, with a thick band of fuller at the centerline.

The paramilitary unit of the Nazi government was a group of organizations that implemented the policies of the administration through force, violence, and brutality. They were responsible to the many crimes against humanity, including genocide and the Holocaust.

Third Reich daggers issued to the Nazi paramilitary units, except the Hitler Youth unit, were in the form of a shorter Viking sword: the brass pommel forms a letter T to the handle; the handle contains the logos of the unit and the eagle with a swastika sign; and nickel-plated throat and drag.

Sturmabteilung or SA was a private army of Adolf Hitler’s political party.

Millions of SA Third Reich daggers were produced during the war.

They are characterized by SA logo in the brown wooden handle, a brown-enameled scabbard and a single ring hanger.

On the blade appears an etching of the unit’s motto: “Alles fur Deutschland” (Everything for Germany).

The Schutzstaffel or SS was the Presidential Guards of the Nazi party. SS Third Reich daggers are more elaborate than the SA (perhaps because SS members were middle class, while the SA were unemployed and poor Germans).

The SS daggers have SS logo at the black wooden handle, a brass chain of alternating SS- and skull-etched medallions, a tassel at the handle, and black-enameled scabbard.

On the blade appears an etching of the unit’s motto: “Meine Ehre heißt Treue” (My honor is loyalty).

The National Socialist Motor Corps or NSKK was a special unit composed of SA members skilled and well-trained in the use of vehicles such as motorcycles and automobiles.

NSKK Third Reich daggers are the same with SA daggers, except that they have a triangular tag at the ringlet hanger containing the NSKK designation.

The National Political Institutes of Education or NPEA were militarized boarding high schools for boys and girls established to educate the young to the principles of the Nazi party.

The NPEA Third Reich daggers are simple in design: two ringlets in brown enameled scabbard with a brass chains for a hanger and no logo on the brown wooden handle.

On the blade appears the unit’s motto: “Mehr sein als scheinen” (Be more than you appear to be).

The Hitler Youth (Hitler-Jugend in German) was the unit intended for training of German boys aged fourteen to eighteen to become future Nazi leaders. Graduates of such training would be drafted to the elite SS unit.

The Hitler Youth Third Reich daggers look like knives because of their hilt details. The handle is a pistol-grip, with a brass-heeled pommel instead of a T-shape model. The handle contains the Hitler Youth flag: a red-and-white diamond with a swastika sign at the center.

The blade of the Hitler Youth dagger is two-edged rounded, instead of tapered, to its point. On the blade appears the etching of the unit’s motto: “Blut und Ehre!” (Blood and Honor).

In the history of daggers in Germany, several changes were made in manufacturing and markings from 1933-1942. Historians and sword collectors agreed on three historical phases of the production of Third Reich daggers: 1933-1935, 1936-1937, and 1938-1942. The table below shows such changes.

We Have sold a Pair of Kriegsmarine M40 Tropical Shorts by Müller and Koch, a Luftwaffe Undergarment for a Flight Jacket . Some items are SS A SS-BW Marked, We paid £1400 for A named Channel Flight Suit by Loutre A.G, A Luftwaffe Beamte (Administration) . Our customers require a Meteorological Officer’s Uniform by C.A. Herpich, A Second War Period Wehrmacht Fur Winter hat and A Set of Padded gloves , For sale in our store A Heersverwaltung (Army Administration) Paymaster Officer’s Tunic,An Army Infantry Feldwebel’s Dress Tunic, A Pair of Wehrmacht Winter Sentry Boots , Germany, Wehrmacht.  A Second War Period Double-Sided Coffin cover,

However, collectible Nazi daggers are outlawed in some countries, especially among nations that have sustained deep traumatic damages during the Second World War.

Some states in America with prominent Jewish settlements would react adversely to any trades involving ceremonial dress daggers belonging to German Army Officers. Since these daggers could potentially spark war sentiments, it is important to bear the following tips in mind:

1. Prudence, sensitivity, and respect should be regarded at all times in dealing with German daggers. This is especially true if you would be dealing in states or countries that have suffered much from the hands of the Nazi.

2. Know beforehand the regulations in localities where German daggers are being traded, auctioned, or bartered.

3. Avoid frictions with the law or local statutes by refraining to trade or purchase your daggers from such areas, or exercising precautions before proceeding to such activities.

4. Do not wear, adorn, or decorate your German daggers in public places.

5. Keep your collection in top shape by observing basic rules .do not touch blades and apply a little light oil to no plated blades only.

The article you have read here does not condone the acts and atrocities of the Nazi Party. It is intended to provide essential information on legally collecting war memorabilia, the daggers of the Third Reich being one of them